Every organization once started with people who were on fire about an idea. Purpose, passion, talent and business sense fused together, and the company started to thrive. When the issues of the day, the results of the month and other people took the lead, the idea lost its power. The common goal faded, engagement levels dropped and the available profit potential will be unexploited. Time to refresh your purpose, restore focus and revitalize the business.

Leef je Merk is able to rediscover and unfold your purpose and has developed the methodology to make it happens. Our technology helps to create an internal compass that makes ambitions attractive, values tangible and motivations a pivot point. This purpose compass can be your guiding star toward grow and a starting point for strategy deployment, corporate culture and total branding.

We are passioned, experienced and have an holistic view. We boost business upon character, sense and motivation and align strategy, culture and brand.

We can tell you why

Our innovative methodology and technology is able to disclose the purpose and values of your business in a unparalleled effective way.

We work with your talent

You are the expert in your field of business. We refresh your view, restore focus and boost the capacity for change.

It's your character that sets you apart

We drill down quickly to the true nature and root of your company. You will become who you are and do what you like to do best.

1. By taking character and purpose as a starting point, strategy, culture and branding will be aligned. This provides consistency, credibility and focus and enhances the attractiveness of the brand and generates the right energy to fulfill the mission.
‍
2. By assessing the brand, the job and the performer in the same way, we are able to identify the right team for the job and the right ambassadors for the brand.

We provide short interventions, inspirational sessions, team-effectiveness workshops, and we can guide the organisation for a longer period to make the desired transformation happen.

Purpose can be the answer to your biggest business problems. It will give direction to people, brand and strategy and is a powerful instrument to engage customers and to energize employees. Like no other, we are able to uncover the company purpose and team motivation. Our purpose profiler help you getting their and reveal your why in a very practical way.

The bridge we built between company- and personal purpose and responsibilities will keep you away from having a statement. Purpose has to penetrate every fiber of your company and has to be actively managed. Purpose is only the most effective weapon in leadership when you live it and built something great out of it together.

Our workshops are designed based on the principle that shared goals, a seasoned team and individual ownership are the cornerstones for success. In the workshop we will identifying the team- and individual purposes, get to know each other better, respect mutual differences and discover personal challenge. The program will be inspiring and fit to your needs, preferably at an external location at the Dutch beach.

Refresh the Business is about realizing a goal that goes beyond turnover and broadly mobilizing the change power needed to achieve the goal. The 'brutal facts & feelings' are brought to the table, the sense and nonsense are separated and the noise must be removed. The new growth goals are then formulated with a fresh look and clear purpose.

When the compass and roadmap are ready, we start the growth engines and people are invited to contribute to the common goal.

The effective InmensGrow program has proven its strength in many companies. It is the path to growth and the way to become better and create more value together.

Business sparring and coaching tor business leaders who like to analyse, discuss their business and discover new possibilities.
Refresh your mind, take a step back and allow yourself some new insights 4-6 times a year, 2-3 hours, Location: Our meeting room, Warmond.

Together with  ‘Ron Driessen Brand Design’ and ‘the Concept Brigade’ we refresh brands, websites and communication concepts. We visualize purpose, brand personality, core values and the essence of your brand and relevance to customers.

Beside corporate communication we are specialized in internal branding. To sell the dream, inspire people, downsize purpose and guide all employees to live and represent the brand.

The Leef Je Merk customer base is diverse and industry independent. We don't make their choice, we guide them and inspire them to focus, engage people and built their brand and a better business.

Leef Je Merk is founded by Rob Westerik (1966) in September 2006 and is a partnership with Caroline Westerik-Sikking who's part time involved. In over 14 years we were able to work with more than sixty clients in numerous industries. We have our office in Warmond (near Leiden), where we also have a consultation room to receive our customers.

Rob Westerik founded Leef Je Merk in 2006 after his career at Unilever which he joined in 1992. he held various positions in sales, marketing and channel management. When he left the company after 13 years he was responsible for 30 field service people in all independent channels like catering and institutions. Rob held an ad interim position of business intelligence manager at Houthoff, a big law firm on the Zuidas. Ending 2006 he started Leef Je Merk Consultancy.

Within 2 years after the start of Leef Je Merk, Rob got inspired by a Harvard theory about purpose and it's impact on strategy and culture. Purpose, one of the least leveraged management tools, became a pivot point. Onwards, the Leef Je Merk portfolio developed towards an almost scientifically substantiated concept, also due to the cooperation with InmensGrow in 2018. Lately, Rob has co-founded the Reward Cooperation with the aim to join forces, work together with like-minded people and have additional qualities available wherever needed.

InmensGrow is our strategic partner in talent development, profiling and transformation technology. Together with Joop Egmond and Patrick Willems we developed the ‘Brand & Purpose Compass’. Leef Je Merk also uses the InmensGrow platform to accompany ’the journey' / Refresh your Business.

Ron is a graphic designer based in Budapest. Far away but still very close in today's digital world. We have been working together for about 8 years and every time I am happy with the result. Ron is a perfectionist who is very good at his profession, he always goes the extra mile and thinks along.

Leef Je Merk is also part of Reward, a cooperation of 8 organizational professionals, which adds strategic competence and coaching skills to our portfolio and your benefit.

If a positioning has to be developed conceptually, we like to work together with the Concept Brigade from Rotterdam. Richard & Harry are two seasoned advertising guys. Their core competence is to transform strategy into an appealing communication concept.

A keynote to remember!

What’s the true nature of your company, what motivates you and how do you turn less energized loyal stayers into energetic ambassadors? These are the key points in Rob's presentations annex mini workshops. Rob's stories are interactive and are enriched with AV resources and game elements.‍

“Hoe word ik een gaaf bedrijf?" is the first book written by Rob Westerik. It was published in 2018. In this book Rob reveals the 9 key-cool-elements which could restore the balance between profit and purpose and make business better. The book is packed with practical examples and tips on how to motivate people and implement core values.​​ 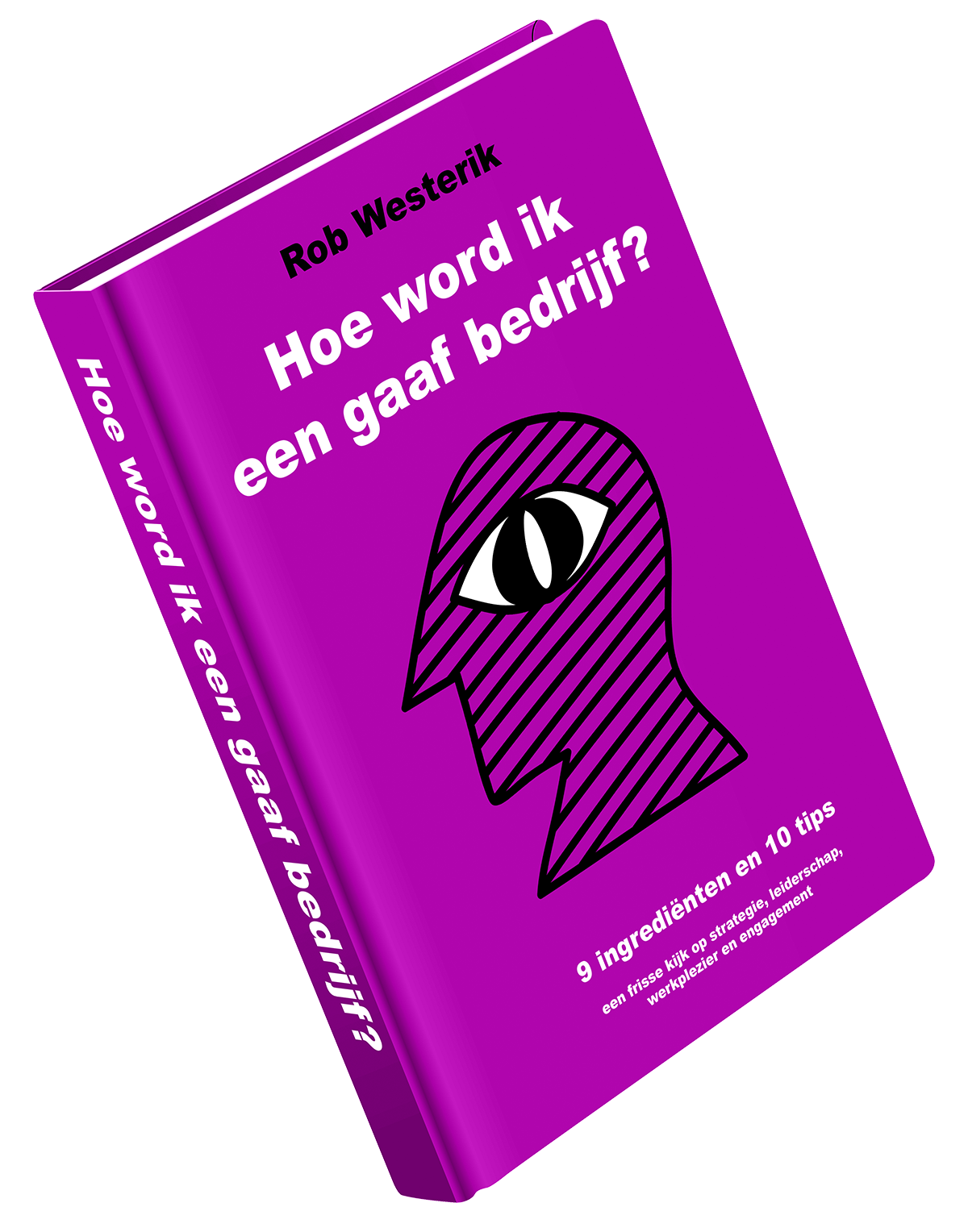 The book, written in dutch, can be viewed via the button below. It is also available on bol.com, managementboek and Bruna‍